Meet Christophe Ponceau - Part 1 : The birth of the gardens of the Sezz Saint-Tropez The Sezz Saint-Tropez opened its doors in July 2010. Although born from the imagination of Shahé Kalaidjian, the hotel also owes its special soul to two talented men: Christophe Pillet, interior designer, and Christophe Ponceau, outdoor magician. Some 6 years on, we offer an exclusive interview with Christophe Ponceau, who takes us back in time to the birth of the gardens of the Sezz.

What is his background? What drove him to become a landscape designer?

Initially, Christophe Ponceau trained to be an architect. It was his meeting with the renowned garden designer Gilles Clement that gave him some insight into the business of landscape and garden design. His architectural studies provided a considerable advantage in this field, however, as it allowed him a better understanding of, and feel for, volume and spatial relationships. Today he puts his talent to good use in event and scenography design. You can find another superb example of his work from early June at the Cité de la Mode et du Design in Paris.

How did he come to do work for the Sezz Saint-Tropez?

It was thanks to Christophe Pillet that Christophe Ponceau and Shahé Kalaidjian met. The two Christophes had previously worked together on the French Pavilion at the 2008 International Exhibition in Zaragoza, Spain. As they had collaborated in the birth of the Sezz Paris, Christophe Pillet already understood Shahé’s expectations well. It was, therefore, perfectly natural that he would recommend Christophe Ponceau when Shahé happened to mention his upcoming Sezz project in Saint Tropez. 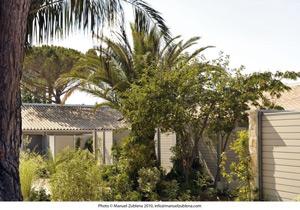 What inspired him in designing the look of the Sezz gardens?

When he began the project, Christophe chose to take inspiration from the surrounding countryside. He wanted to keep the design of the gardens as natural as possible, and considered it very important to maintain the unique atmosphere of the landscape around Saint-Tropez. The grounds were fallow when the project started and Christophe chose to learn from the vegetation that was already established. He wanted the gardens of the Sezz to show their wild side, while still maintaining a distinct dolce vita feel. So from the marriage between the talent of Christophe Ponceau and the magic of Saint-Tropez were born the gardens of the Sezz. We can’t wait to tell you more about the world of gardens designed by Christophe in a few weeks!